Located in Wanette, Oklahoma, Soggy Bottom Trails Pub & Campground sits on 120 acres right on the bank of the South Canadian River near the historic iconic Byars-Wanette Railroad bridge. There are many trials to ride on, river access, swim and more. We offer guests RV sites along with tent sites and cabin rentals for those seeking something a little more different. One may take advantage of the many amenities we offer that include shower and restroom facilities to name a few. Whether its for a night or two, we hope to see you soon! 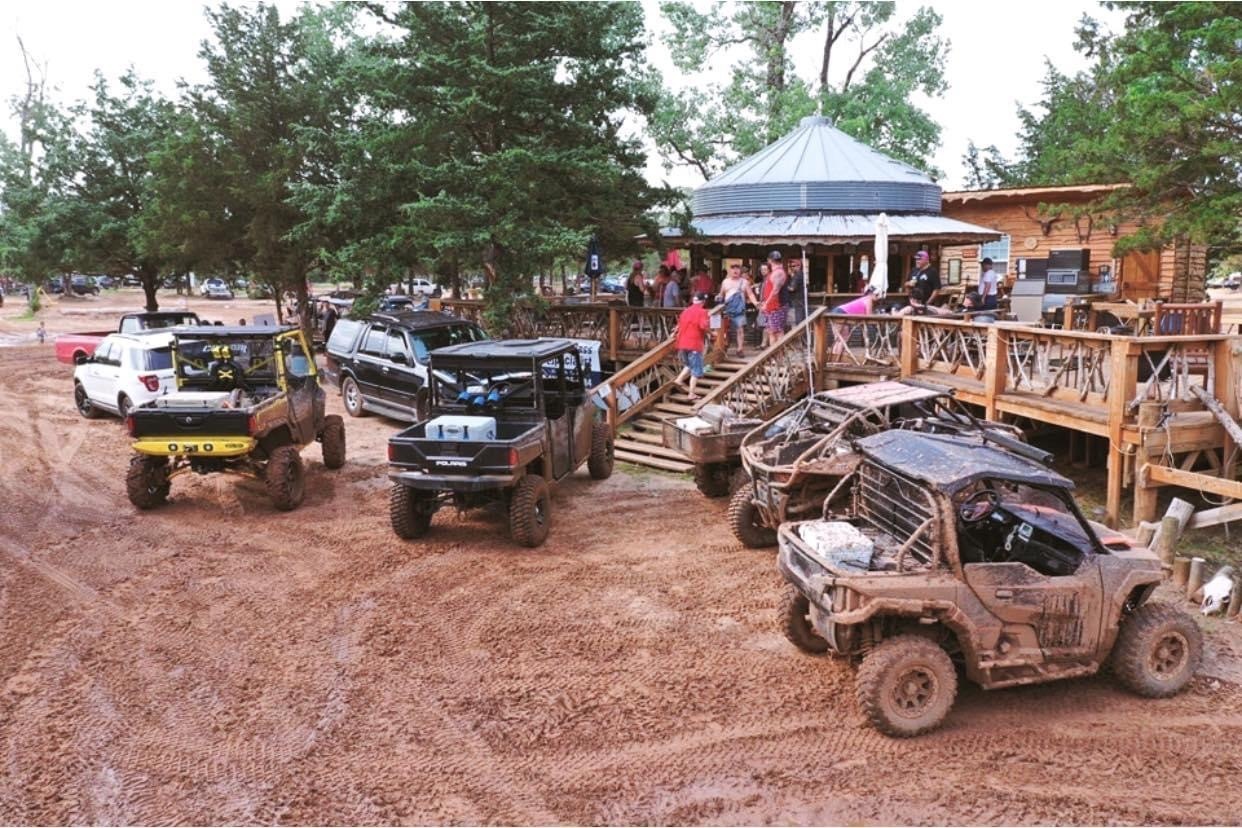 RELEASE, HOLD HARMLESS & INDEMNIFICATION The parties to this Release And Waiver of Liability and Indemnity Agreement are the owners of Pitts & Pitts Land & Buffalo, LLC also known as Soggy Bottom Trails & Pub, Wanette, Oklahoma, their officers, managers, owners, contractors, subcontractors, employees, agents, promoters and sponsors (herein after collectively referred to as the "Released Party") and the UNDERSIGNED, personally and as parent, legal guardian and/or responsible party for minors, his or her personal representatives, legal guardians, heirs, companions and next of kin (hereinafter collectively referred to as the "Releasing Party"). Releasing Party, in consideration of being permitted to enter into Soggy Bottom Trails & Pub, Wanette, Oklahoma, for any purpose and all activities, observing or participating in anyway, or working for the Park or its subcontractors or vendors, the undersigned, for himself/herself, his/her minor child and/or ward and his/her personal representatives, heirs, and next of kin or minor for which he/she is the responsible party, with knowing and willing consent of his/her Parent or Legal Guardian, and companions, acknowledges, agrees and represents, that he/she has, or will immediately upon entering into the confines of Soggy Bottom Trails & Pub, Wanette, Oklahoma, and will continuously thereafter, inspect said confines and all portions thereof which he/she enters and which he/she comes into contact, and he/she further warrants that his/her entry upon said confines and his/her participation in any activities within these confines constitutes acknowledgment thereof that he/she has inspected said confines and that he/she finds and accepts the same as being reasonably suited for the purpose of his/her use, and he/she does further agree and waive that at any time he/she is within or about-the confines and he/she believes anything to be unsafe, he/she will immediately leave the confines and will advise the management of Soggy Bottom Trails, Wanette, Oklahoma, of the condition(s), which he/she believes to be unsafe. Further, in such consideration, the Undersigned: HEREBY COVENANTS NOT TO SUE, RELEASED PARTY, WAIVES AND DISCHARGES the Released Party from any and all liability to the Releasing Party for any and all damage, and any claim or demands therefore on account of injury to the person or property or resulting death of the Releasing Party or any person accompanying the Releasing Party or permitted by the Releasing Party to use his/her off-highway vehicle or the off-highway vehicle under his/her supervision, all for the purposes herein referred to as the Releasing Party “companions", whether caused by negligence of the Released Party or otherwise while the Releasing Party or his/her companion(s) is or are in or upon the confines for any purpose or reason. HEREBY AGREES TO INDEMNIFY, SAVE AND HOLD HARMLESS the Released Party and each of them from any loss, liability, damage, or cost, real or imagined, which they may incur due to the presence of the Releasing Party or any of his or her companions in or upon the confines for any reason caused by the Released Party or otherwise. HEREBY ASSUMES FULL RESPONSIBILITY FOR AND RISK OF BODILY INJURY, DEATH OR PROPERTY DAMAGE OR LOSS to himself/herself or to any of his/her property or companions due to the negligence of the Released Party or otherwise while in or upon the confines or while participating in or observing any activities occurring within the confines for any reason. This includes any damages made to your vehicle on property owned by Released Party and is not responsible for any ticketing or warnings given by any Game Warden or any other type of Oklahoma Law Enforcement on property or river/creek/stream near said property owned by Releasing Party. HEREBY EXPRESSLY ACKNOWLEDGES AND AGREES THAT RIDING OFF-HIGHWAY VEHICLES OR BEING WITHIN AN AREA IN WHICH SUCH VEHICLES ARE BEING USED INVOLVES THE RISK OF SERIOUS INJURY AND/OR DEATH AND/OR PROPERTY DAMAGE. The Releasing Party further expresses that the foregoing release, waiver, and indemnity agreement is intended to be as broad and inclusive as is permitted by the law of the state of Oklahoma and that, if any portion thereof is held invalid, it is agrees that the balance thereof shall, notwithstanding, continue in full legal force and effect. AGREES THAT BY SIGNING THIS FORM the aforementioned attests that he or she has read the rules and regulations of Soggy Bottom Trails & Pub, Wanette, Oklahoma, and agrees to comply with them. Failure to comply can result in expulsion for the day or more. THE RELEASING PARTY HAS READ, AND COMPREHENDED AND NOW VOLUNTARILY SIGNS THE RELEASE AND WAIVER OF LIABILITY AND INDEMNITY AGREEMENT, and further agrees that no representations, statements or inducements apart from the foregoing written agreement have been made. By clicking 'Yes, I accept the cancellation policy, rules and terms of service', you agree that you have read and agree with the terms of the waiver and that the information you provided is accurate. You furthermore agree that your submission of this form, via the 'Yes, I accept the cancellation policy, rules and terms of service' button, shall constitute the execution of this document in exactly the same manner as if you had signed, by hand, a paper version of this agreement.

Must be 21+ to enter the Pub. This is an Oklahoma law. No outside beverages may be brought into the Pub or patio area of the Pub.

All dogs must be on leashes.

Do not speed through the campground! If you are caught speeding, we will need to take appropriate action. In the camping area, do not exceed 15 MPH. Near the pub, do not exceed 5 MPH. There are many guests, including children and pets, that are walking across the street near the pub and we want all guests to be safe.

No loud music after 10 PM. Be respectful of other guests nearby.

Please be sure to clean up after yourselves and do not litter. If you pack it in, you need to bring it out. We have trash cans located throughout the property.

Please do not use firearms in the campground area, on the trails, or at the river. We also request that your firearms not be visible in those areas either.

Please note we do not allow glass bottles of any kind on the campground property. River bed or trails.